Thomas Lynch, Jr.  was born in Georgetown. He would later sign the Declaration of Independence for South Carolina.

The Declaration of Independence arrived in Charleston. Maj. Barnard Elliot read it to a large, enthusiastic crowd under the Liberty Tree.

Captain Joseph West complained that several of the settlers were “so addicted to Rum, that they will do little but whilst the bottle is at their nose” and “grand abuses that prophanely violate the Sabbath.”

The Continental Congress approved the final wording of the Declaration of Independence. The ideals of individual liberty, first espoused by John Locke (partially in his Fundamental Constitutions of Carolina and Two Treatises of Government) were now clearly expressed by Thomas Jefferson.

John Hancock signed the document that day, and it was sent to John Dunlop’s printing shop where 200 copies were printed. Copies were sent across the country to all major cities in America.

South Carolina signers of the Declaration of Independence

Dr. David Ramsay gave a public address in celebration of American independence. He stated that “our present form of government is everyway preferable to the royal one we have lately renounced.”

Members of the Union Party “marched sedately to Scots Presbyterian Church” for an Independence Day celebration. The Nullifiers met at the Circular Church and reassembled for an outdoor rally:

Under a splendid Pavilion … from which mere boys of 8 to 12 years old were carried on the backs of servants, completely insensible from drink, while dead drunk seniors staggers and swore up and down the public streets … a complete exemplification of that depravity which the foul doctrine of Anarchy and Nullification is calculated to end in.

The Stamp Act Congress convened in New York City. South Carolina was the only southern colony to send representatives:

For the first time, the South Carolina men learned of the violent August protests in Boston in which the stamp officer, Andrew Oliver, was hanged in effigy and Sheriff Greenleaf and Lt. Gov. Hutchinson were stoned when they tried to intervene. 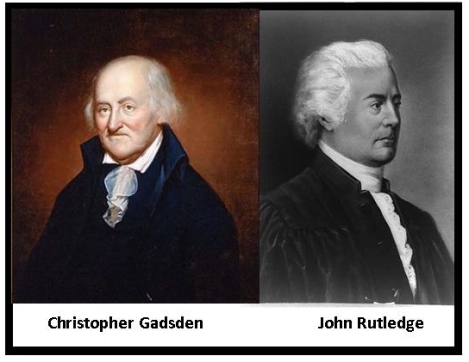