The disproportionate numbers of Negro slaves versus white settlers began to concern some citizens. In a letter to the South Carolina Gazette, a writer called “Mercator” argued about the danger of the “importation of Negroes.” He argued that in the four years past there had been imported 10,447 Negroes and in the four years before only 5153. He suggested that some method to prevent the large importation of Negroes must be speedily adopted or else there would be “the most fatal consequence to the province.” 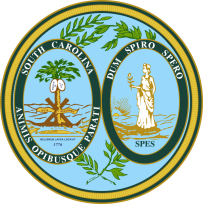 A state seal of South Carolina was authorized to be designed by Arthur Middleton and William Henry Drayton.

Charles Pinckney returned to Charlestown and lived at 2 Orange Street, and helped his mother with his father’s estate. The will reserved property valued at £53, 000 and stipulated that “sixty of the worst of my plantation slaves” be sold to pay his debts. He left his mansion on Queen Street to his son, Charles. The remainder of his estate – three plantations, Fee Farm and Drainfield in St. Bartholomew’s Parish and Snee Farm in Christ Church – were to be divided equally among his wife and children.

In a letter to his Aunt Janey, Gus Smythe wrote:

I have got the most responsible post in the Signal corps here & the most dangerous when they are shelling, for they avowedly make this steeple their mark when firing & have made some very close shots. To look down on them from here, all around the foot of the Steeple, in the grave yard, Streets, City Hall, Court House, Guard House & houses, it seems & is miraculous that so far they have missed. I only hope they continue to do so, for tho’ there may be some “glory” there will be little pleasure in tumbling down with the Steeple. 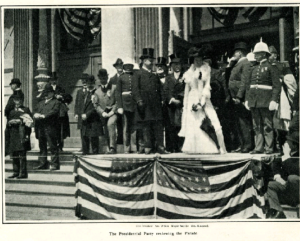 Pres. Roosevelt at the Expo

President’s Day at the South Carolina West Indian Exposition with President Teddy Roosevelt visiting the Ivory City. Thousands of people lined the streets while a parade of three thousand representing all branches of the military marched to the Exposition. The president gave a speech and attended a luncheon at the Woman’s Building.