In 1914 the Jenkins Band was invited to perform at the Anglo-American Expo in London and Jenks performed with the band until the outbreak of World War I closed down the Expo. Jenks was admitted to the Royal Academy of Music in London where he studied composition.

His piece, “Charlestonia” was written while he was a student, and later expanded into a finished piece before his death. To learn the entire story of Jenks’ life and the Jenkins Orphanage Band, read my book Doin’ the Charleston.

John Olmsted, the nephew and adopted son of Frederick Olmsted, who designed Central Park in New York City, arrived in Charleston to work on the design of Hampton Park.  He immediately noted that the bandstand, leftover from the South Carolina Exposition that was still in place in the formal garden, should be the most notable presence in the park. 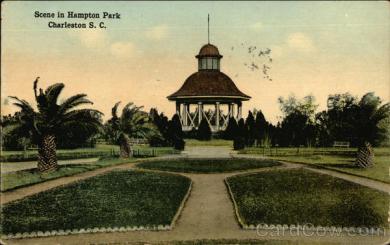 Gabriel Manigault was born in Charlestown. He would become one of the most successful merchants in America.

Captain Alexander McQueen held a dinner party at his home at 106 Tradd Street. After dinner Alexander locked all doors and began to propose a series of toasts. One of his guests, Lt. Colonel Francis Marion, one of the heroes of Ft. Moultrie victory in 1776, was not a heavy drinker. He removed himself from the house by dropping out of a second floor window, breaking his foot.

The Hibernian Society was organized in Mr. Corbett’s Tavern. By 1840 the Society had constructed a magnificent hall on Meeting Street, where they still conduct weekly meetings.

Christopher Columbus (C.C.) Bowen married a widow eight years his senior, Susan Petigru King. Bowen had met King in Washington, D.C. while she was working as a clerk-translator in the Post Office Department. He discovered that Susan was the “largely ungovernable” daughter of James Louis Petigru, one of South Carolina’s most influential citizens. The elder Petigru was an able and respected lawyer who served as the state’s Attorney General and Federal District Attorney.

In the pre-dawn morning of, one hundred and seventy-seven children were evacuated from the Jenkins Orphanage when a fire swept through the second floor. Part of the wall collapsed and several rooms were gutted. The old orphanage was no longer habitable. The fire also destroyed the majority of the Orphanage’s historical records, a monumental loss that has only become more tragic over time as various historians, writers and archivists have attempted to piece together the story of the orphanage and its music. This was the event that ended the Jenkins Orphanage presence in downtown Charleston. Soon after the fire, the city moved the orphanage to out of the city. 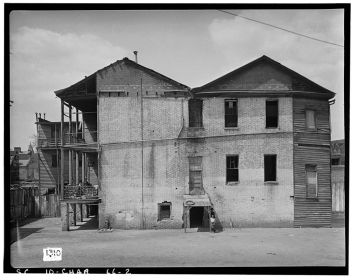 Old Marine Hospital on Franklin Street (side view). The back wing burned.

After entering public life Robert Smith changed his last name for that of his prominent colonial ancestor Colonel William Rhett.  He studied law and became a member of the South Carolina legislature in 1826 and also served as South Carolina attorney general (1832), U.S. representative (1837–1849), and U.S. senator (1850–1852). He was pro-Southern extremist he split (1844) and one of the leading fire-eaters at the Nashville Convention of 1850, which failed to endorse his aim of secession for the whole South.

One of the original “Fire-Eaters” Rhett was was dubbed the ‘Father of Secession’ and called the ‘Lone Star of Disunion’ by his enemies in the Whig Party. In her famous diary, Mary Chesnut called Rhett “the greatest of seceders.”  During the War Rhett continued to express his radical views  through editorials in the Charleston Mercury newspaper, edited by his son. After the other Southern secession in 1861, Rhett was considered one of the leading candidates for President of the Confederate States. bit In the end, he was viewed as too radical for the position and the more conservative Jefferson Davis was selected as chief executive.

Rhett was critical of the Confederate Government for many reasons, including government intervention in the economy. He had previously envisioned a Confederacy that also included the Caribbean and even Brazil, but the Confederate States didn’t live up to Rhett’s dream and criticized Jefferson Davis’ adminstration as strongly as he had once criticized Washington, DC. After the War Rhett refused to apply for a Federal pardon. He died of cancer in 1876 and is buried in Magnolia Cemetery in Charleston.

The Citadel, a military college, was founded in response to the Denmark Vesey rebellion. Charleston City Council established a “municipal force of 150 men … for an arsenal, or a ‘Citadel’ to protect the preserve the public property and safety.”

Daniel Jenkins preached a sermon at the New Tabernacle Fourth Baptist Church titled “The Harvest is Great by the Laborers Are Few.” It was an appeal to the congregation to “to help these and other unfortunate children.” The congregation was just a poor as Jenkins. The donated money did not last long; it paid for some food and clothing and the rental of a small shack at 660 King Street.

Henry Laurens and Charles Pinckney, Junior presided over a meeting at the Liberty Tree in which the continuation of the Association was discussed. Thomas Lynch: “rode fifty miles to Charles Town and exerted all his eloquence and even the trope of Rhetorical Tears for the expiring liberties of his dear country, which the Merchants would sell like any other merchandise.” They then voted to discontinue the boycott on all items except tea, and “send a bitter letter to the northern colonies” about their conduct in breaking the Association.

The non-importation crisis had a severe economic impact on the American colonies, with a dramatic drop in imports from 1768 to 1769.

The stage was now set for Charlestown, and the rest of the American colonies, to shrug off their ties with the British motherland. 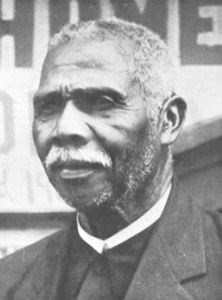 Daniel Jenkins discovered four small black children huddled in a railroad box car. Despite the fact that he lived in a two-room house, with his wife and four children, Jenkins brought the orphaned children to his small home. This was the incident that led to the formation of the Orphan Aid Society of Charleston, the founding of the Jenkins Orphanage, the establishment of the Jenkins Orphanage Band. Within ten years, the Jenkins Band had performed in Europe and for Pres. Teddy Roosevelt’s inauguration. They later appeared on Broadway in Uncle Tom’s Cabin, and Porgy, performed for Pres. William Howard Taft and at the Anglo-American Expo in London. They also had a hand in introducing jazz music to small towns up and down the east coast and helping to popularize a dance that became known as “the Charleston.”

For the entire story, read my 2013 book, Doin the Charleston.

After several meetings with Chief Justice Nicholas Trott, the Proprietors issued an order declaring him:

a permanent member of the Council without whose presence there should be no quorum for the transaction of business, and without whose consent practically no law should be passed.

Trott became the most powerful man in South Carolina: Attorney General, Chief Justice and without his presence, the Upon Trott’s return to Charles Town, Governor Craven and the Assembly were obviously distressed. They wrote: “A power in one man not heard of before … unheard of in any of the British dominions.”

This was the last major battle in the Carolinas, and Col. William Washington’s final action. Midway through the battle, Gen. Greene ordered Washington to charge a portion of the British line positioned in a thicket along Eutaw Creek. During the last charge, Washington’s mount was shot out from under him, and he was pinned beneath his horse. He was bayoneted, taken prisoner, and held under house arrest in the Charleston area for the remainder of the war. 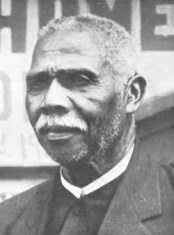 Reverend Daniel Jenkins appeared in the magistrate’s courtroom on Bow Street, followed by more than a dozen of his charges, all under the age of fourteen. The next day the London Daily Telegraph filed the following story:

Just before the rising of the court, a coloured man entered with a troupe of thirteen little Negro boys whose ages ranged from five to about fourteen years. The man in charge of the boys said he was the Reverend D. J. Jenkins, a Baptist Minister of Charlestown [sic], America, and he wished to make an application to the magistrate.

On entering the witness box, the appellant stated that he had come over to this country to raise funds for an Orphanage with which he was connected in Charlestown. He had brought with him his boys, who all played on brass instruments, and his object was to let the boys play their band in the public streets, after which he lectured and collected money for the Orphanage. He had been stopped that morning whilst thus engaged, and told that he was liable to be taken into custody for what he was doing, and he wished to be informed whether that was so.

Sir John Bridge told applicant that of course he must not cause an obstruction in the public thoroughfares or the police would interfere. Inspector Sara, who was on duty in the court, pointed out that under an Act of Parliament no child under the age of eleven years was allowed to sing, play or perform for profit in the public streets.

Applicant: But could not an exception be made in my case, seeing the object I have in view?

Sir John Bridges: Certainly not. The law makes no exceptions.

Applicant then said he was without money to take the children back to America. Sir John Bridge said he had no fund which was available for such a purpose, and advised applicant to apply to the American consulate. Inspector Sara said he would send an officer with the Applicant to the Society for the Prevention of Cruelty to Children where probably he could obtain assistance, and Sir John Bridges gave a sovereign to applicant for present necessities, for which he appeared very grateful.

This news item provoked an editorial on Page 4 of the same issue, which concluded:

Much may be done, no doubt, to raise money for an Orphanage; but to let loose a brass band of thirteen Negro children upon an urban population suffering from nerves is likely to create almost as many orphans as it would relieve.

After the court appearance and subsequent publicity, Jenkins was approached by the owner of a local London theater who offered to feature the Orphan Band on stage. Jenkins agreed, but then changed his mind once he appealed to local churches who eagerly invited him to speak during their services. From the pulpit of the Metropolitan Tabernacle, Jenkins pled for help and more than £100 was raised in a matter of moments. He repeated this successful appeal at several more churches before steaming back home to Charleston, where he paid off the debt.