The six French ships (a frigate, four sloops and one galley) from Martinique, led by Captain De Feboure, crossed the Charles Town bar with more than 700 Spanish soldiers on board. They anchored off Sullivan’s Island, awaiting winds in which to sail into the harbor. 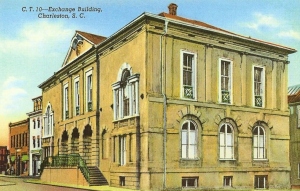 Thirty-three people were arrested in Charlestown and charged with encouraging residents to resist British authority. The prisoners, some of whom had been placed under house arrest, were dragged from their beds by British soldiers, and jailed in the Provost Dungeon of the Exchange Building. The arrested men included:

Within a few days the prisoners were transferred to the ship Sandwich in Charlestown harbor. Edward Rutledge learned of his two-year old son’s death while on board. Being unable to attend the funeral and comfort his wife increased his bitterness toward Britain. Militiamen like Charles Pinckney were paroled to their homes.

Col. John Laurens was killed at Tar Bluff on the Combahee River, about forty miles south west of Charleston, in a completely useless skirmish. The British were trying to loot supplies of rice before leaving, and Laurens’ company of fifty men were determined to stop them. John Laurens was the first Patriot killed.

Martha Laurens, living in Vigan, France, did not learn about her brother’s death until three months later. However, during her morning prayers for her family, on this day, she stopped praying for her brother as she “felt there was no longer need.”

Years later, while visiting Charleston, Lafayette stated, “Colonel Laurens was the most valiant officer and accomplished gentleman I ever knew. He was the beau ideal of gallantry.”

In 2015 John Laurens became a more well known cultural figure through the popularity of the Broadway musical “Hamilton.” Laurens was a major character in the the first Act, and Hamilton mourns Laurens’ death in Act II.