Christopher Gadsden wrote to William Samuel Johnson, a Connecticut lawyer, about his concerns over the large black population and the constant threat of a revolt.  Gadsden said he hoped that “in the case of South Carolina, the enslavement of blacks would not cause the enslavement of whites.”

Irish architect James Hoban arrived in Charleston from Philadelphia. He was contracted to rebuild the a court house on the ruins of the old State House. President George Washington admired Hoban’s work on his Southern Tour, where he met the young architect in Charleston in May 1791. Washington summoned the architect to Philadelphia, in June 1792, where he was chosen to design and build the White House.
Both the Charleston County Courthouse and the White House were modeled on Leinster House, the current Irish Parliament Building.

1780-The Siege of Charlestown 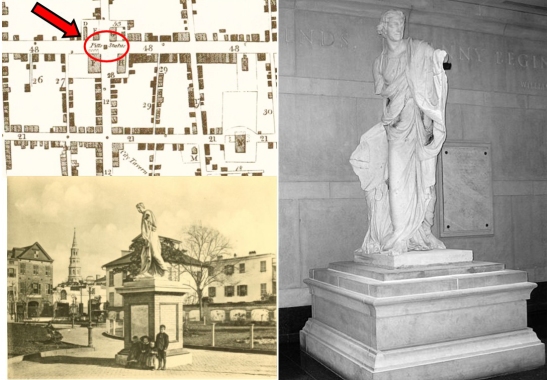 A British cannon, fired from the James Island battery, shot off the arm of the statue of William Pitt in the intersection of Broad and Meeting Streets. After the war, the statue was later moved to the Grimke house at 321 East Bay Street. In 1808 it was moved to the Charleston Orphan House and in 1881 moved again to Washington Park. Presently it stands inside the entrance of the new Charleston County Court House.

At this time, the Americans had 4200 men in Charlestown fit for duty while the British counted 8300.

The first air show was performed in Charleston. It was a promotional tour by the Victory Liberty Loan program that featured eleven planes that were shipped to Hampton Park in pieces. The wings were assembled to the plane’s fuselage in the park.  Most of the pilots were former World War I and thousands of people show up to watch the “thrilling stunts and turns … turning loops … and a daring nose spin.” It was called an “impressive demonstration of the battling power of the airplane.” The local newspapers also reported that:

Interest in the part of the spectators was by no means confined to the machines, the aviators coming in for their share of curiosity, especially by members of the fair sex.