Vita Sackville-West, writer, died on June 2, 1962 at 70. She was known for her exuberant aristocratic life, her passionate affair with the novelist Virginia Woolf, and Sissinghurst Castle Garden, which she and her husband, Sir Harold Nicolson, created at their estate. She was involved in several same-sex affairs in her life, while her husband also conducted same-sex affair, and also shared lovers. She also has a Charleston connection.

One of Sackville-West’s house servants gave birth to a boy named Gordon Langley Hall, who grew up surrounded by opulence, intellectual and sexual liberalism. Gordon moved to Charleston in the 1960s, had several homosexual affairs, and in 1968 had successful sexual reassigment surgery, and changed his name to Dawn Langley Hall.

Dawn then became engaged to John-Paul Simmons, a young black motor mechanic with dreams of becoming a sculptor. Their marriage on January 21, 1969 was the first legal interracial marriage in South Carolina, and the ceremony was carried out in their drawing room reportedly after threats to bomb the church. After a second ceremony in England, the crate containing their wedding gifts was firebombed in Charleston, and Simmons received a ticket the next day when the charred remains were obstructing a sidewalk.

However, that is only the tip of the iceberg for this outlandish story.

The entire story of Gordon / Dawn’s life can be read in Edward Ball’s Peninsula of Lies. There is also a chapter about Gordon / Dawn in my book, Wicked Charleston, Vol. II. 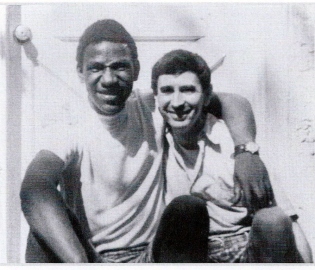