I’ve been a Rodney Crowell fan since 1978. He is, to be blunt, one of the great American songwriters of the last 40 years and I have listened to his music for 1000s of hours. What little guitar playing I learned, I learned so I could play Crowell’s songs. During the 70s and 80s Nashville artists waited for new Rodney songs to record. He has also recorded seventeen LPs (or CDs) since 1978, charting eight Top Ten Country songs, including five consecutive #1 hits, in 1988-89. 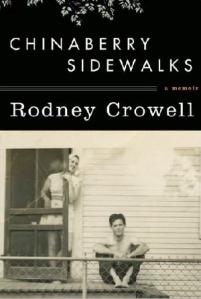 Crowell has written a memoir about his early life growing up in hardscrabble Houston, Texas in the 1950s. Crowell’s former wife, Rosanne Cash, published an amazing memoir last year, Composed, which was less a memoir of her public life, than an intense meditation on how her life influenced her artistically. I was hoping for something like that from Crowell, but not this time out. It is a study of his life as a child, and tells the story of his parent’s life more than his own.

Most reviews are giving the book a home run … I have to differ. First of all, it is written in too much of a folksy, aw shucks style, peppered with down home expressions that most of us heard while growing up, but left behind as we moved out into the world. Crowell and his editor obviously had never read the old adage, “a little bit goes a long way.” It also is a bit clunky at times jumping from chapter to chapter, back and forth in time. There is an endless chapter about attending pentecostal church meetings that wears out its welcome after the first 2000 words, but goes on and on and on.

Here’s hoping Crowell has another memoir in the works that will illuminate his professional career as a songwriter and musician. Until then, I recommend you pull out your copies of Diamonds & Dirt or Fate’s Right Hand and enjoy the music! 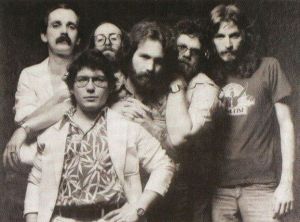 The Aces came out of Memphis, TN.  in 1972. At the recommendation of Barry “Byrd” Burton, who was engineering and producing at the famous Sam Phillips Recording Studio they recorded and developed a sound mixing of pop, country and blue-eyed soul, led by the literate and often quirky lyrics, and distinctive vocals by lead singer/songwriter Russell Smith. They have released 18 LPs over 30s.

Their first LP, Stacked Deck, was a hit, powered by the Top 10 country & pop,(and  now-classic) song, “Third Rate Romance.” In 1976 they earned a Grammy for “Best Vocal Performance” for “The End Is Not In Sight.” With their music described as “roots rock”, “country rock” mixing reggae, blues, country, bluegrass, rock and folk, the Aces were too eclectic to ever have consistent mainstream success. But their musical legacy today can be heard in most modern country and Americana music. The Aces are a band musicians love to love.

South Carolina musicians run through the wide spectrum of American music – blues, jazz, country, soul, funk, and rock and roll. This is NOT a comprehensive list of great musical artists from the Palmetto state, rather it is an attempt to show the wide range of diversity and quality music that South Carolina has given to the world.  If you’re interested in reading about the roots of American popular music (and South Carolina’s role) read my book, Doin’ the Charleston.

Thomas is the lead singer of the band Matchbox 20. “Smooth” won a Grammy Award for both Santana and Thomas.

An Army brat, he was born at Landstuhl Regional Medical Center, West Germany an army hospital. Thomas’s parents divorced while he was very young, at which point his father retired and disconnected from the family. He and his sister were raised by his mother and grandparents in Turbeville, South Carolina. When he was 12, his mother was diagnosed with cancer. He attributes the song “3AM” to this time.

Maurice (with the Zodiacs)earned Rock and Roll immortality for the classic “Stay”, which was famously covered by Jackson Brown in 1977. “Little Darlin’ hit #2 in 1957 and was featured in the film American Graffiti.

As guitarist and main songwriter for MTB, Caldwell and the Marshall Tucker Band are stalwalts of the 1970s Southern rock movement and the greatest rock band from South Carolina …

“FIRE ON THE MOUNTAIN” by George McCorkle (Spartanburg, SC)

McCorkle, second guitarist for The Marshall Tucker Band, was a major songwriter for the Tuckers. “Fire” is one of the great Southern country rock songs of the 1970s.

“HALF OF MY MISTAKES” by Radney Foster and Bobby Houck (of the Blue Dogs, Charleston, SC)

Houck, who is part of The Blue Dogs, wrote this amazing song with Texas music legend, Radney Foster. Foster is one of the best writers/performers on the Country/Alt/Americana scene today.

“AIN’T NO MOUNTAIN HIGH ENOUGH” & “AIN’T NOTHING LIKE THE REAL THING” & “YOU’RE ALL I NEED TO GET BY” & “LET’S GO GET STONED” by Nicholas Ashford (Fairfax, SC) and Valarie Simpson

The husband and wife team known as Ashford & Simpson is as big a part of the Motown story as is Marvin Gaye and Diana Ross; they were one of the top songwriting units for Berry Gordy’s assembly line production. “Stoned” was their first major success as a hit for Ray Charles.

Heyward wrote the libretto for this opening song for the opera “Porgy and Bess.”  There are more than 1000 recorded versions of this song, but Billie Holiday’s version takes the cake.

“EVERY DAY IN THE WEEK BLUES” by Pink Anderson (Laurens, SC)

After being raised in Greenville and Spartanburg, SC Anderson joined Dr. Frank Kerr of the Indian Remedy Company in 1914 to entertain the crowds while Kerr tried to sell a concoction purported to have medicinal qualities.He traveled with Leo “Chief Thundercloud” Kahdot  and his medicine show, often with the Jonesville, South Carolina based harmonica-player Arthur “Peg Leg Sam” Jackson. In May 1950, Anderson was recorded by folklorist Paul Clayton at the Virginia State Fair.

Major country star of the 60s, 70s and 80s. In later years Anderson hosted a game show on TNN.

A successful country singer during the 1980s, this is a bone fide honty tonk classic.

Where do you stop listing the classic songs of James Brown? A legend and a force of nature.

A monumental talent … one of the greatest musicans of the 20th century.

Freddie Green was guitarist for the Count Basie Orchestra for 50 years … the longest job in jazz history. “Mr. Rhythm” was also a brilliant song writer and arranger, as you will hear in this Basie classic.

“BLUES FOR LAWRENCE” & A GATHERING IN THE CLEARING” by Cat Anderson (Greenville, SC)

Anderson grew up in the Jenkins Orphanage in Charleston, SC and played in their boys brass band. He played for more than 20 years with Duke Ellington in the 1950s-70s.

“YOU’VE GOT TO STAND FOR SOMETHING” by Aaron Tippin (Traveler’s Rest, SC)

A honky-tonky singer who had a successful run in the 1990s.

“ONLY WANNA BE WITH YOU” & “OLD MAN & ME (WHEN I GET TO HEAVEN)& “TIME” by Darius Rucker, Mark Bryan, Dean Felber and Jim Sonnefield (Hootie and the Blowfish)

A legendary jazz player who never became a legend. He was another member of the Jenkins Orphanage Band from Charleston, SC and a major artist in the 1920s and 30s.

Yet another musician from the Jenkins Orphanage House in Charleston. He was a prolific songwriter of “negro blues” songs in the 1920s. “Jazz Me Blues” is an American Standard. Delany also wrote the obscure and filthy “All The Girls Love Big Dick”.