Early in the morning Washington left for Savannah in the company of Gov. Pinckney, Gen. Charles Cotesworth Pinckney and Sen. Pierce Butler. They escorted Washington to his cousin’s (Col. William Washington) plantation Sandy Hill for the evening meal and lodgings.

Butler remained with Washington for the entire journey to Savannah (where he owned several plantations).

Before breakfast, Washington visited the Orphan House at which there were 107 boys and girls, and he was impressed with the management of the house.After touring the house and gardens, the President had breakfast with the children.

(Note: The Orphan House was being operated out of a building off Market Street at this time. The famous Orphan House building on Calhoun street opened in 1794.)

Washington wrote in his diary:

I also viewed the City from the balcony (the portico above the clock) of [St. Michael’s] Church from whence the whole is seen in one view and to advantage, the Gardens & green trees which are interspersed adding much to the beauty of the prospect. Charleston stands on a Pininsula [sic] between the Ashley & Cooper Rivers and contains about 1600 dwelling houses and nearly 16.000 Souls of which about 8000 are white—It lies low with unpaved streets (except the footways) of sand. —There are a number of very good houses of Brick & wood but most of the latter—The Inhabitants are wealthy, —Gay—& hospitable; appear happy and satisfied w’ith the Genl. Government. 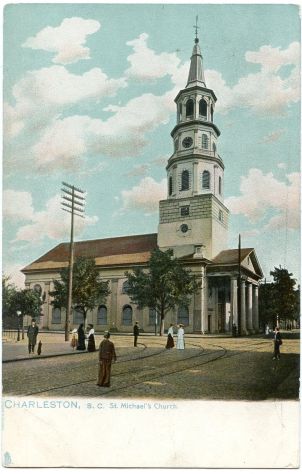 Washington toured the town on horseback for most of the day, riding up and down most of the principal streets. Sometime during the day Washington stopped to observe the work on rebuilding of the State House and talk with the supervising architect, James Hoban. 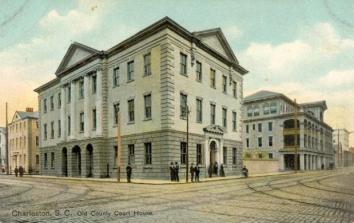 The evening meal was at Sen. Pierce Butler’s home and then a party at Gov. Pinckney’s home.

Washington visited Fort Johnson (James Island) and Fort Moultrie (Sullivan’s Island). For the evening Washington was once again entertained at the Exchange at a dinner hosted by Gov. Pinckney and other principal gentlemen of the city.

The dinner must have been as spectacular as the previous evening for Washington wrote in his diary “there were at least 400 ladies – the Number & appearance of which exceeded anything of the kind I had ever seen.”

Before breakfast Washington visited and examined the lines of Attack and Defense of the city and proclaimed them adequate.

For the noon meal Washington dined with the Members of Cincinnati in the long room of McCrady’s Tavern on East Bay Street. A choir of singers entertained the diners throughout the meal.

In the evening Washington attended “an elegant dancing Assembly at the Exchange – At which were 256 elegantly dressed & handsome ladies.” According to newspaper reports the ladies were “all superbly dressed and most of them wore ribbons with different inscriptions … such as “long live the President.”

The president had breakfast with Elizabeth Grimke Rutledge at her home on Broad Street (John Rutledge House). Mr. Rutledge (Chief Justice of the S.C. Supreme Court) was on the Circuits and not in the city.

Later in the day, at his lodgings, he

was visited about 2 oclcock, by a great number of the most respectable ladies of Charleston – the first honor of the kind I had ever experienced and it was flattering as it was singular.

Washington had breakfast at Snee Farm, the home of Gov. Charles Pinckney. Pinckney apologized for the house, calling the home “a place so indifferently furnished and where your fare will be entirely that of a farm.”

After breakfast Washington crossed into Charleston from Haddrell’s Point which was the eastern terminus of the ferry. Washington was rowed across the river on a large barge by “12 American Captains of Ships, most elegantly dressed.” He noted:

There were a great number of boats and barges on the river filled with Gentlemen and Ladies, as well as two boats of musicians, all of whom attended Washington across the river.

Washington was greeted at the Point by city recorder John Bee Holmes, and Gen. Charles Cotesworth Pinckney, and Edward Rutledge. A month after the meeting Washington offered Pinckney and Rutledge a seat on the Supreme Court, a seat that had recently been vacated by Edward’s brother, John Rutledge. Both men declined due to family finances.

Once in Charleston Washington was greeted by Lt. Gov. Isaac Holmes, Charleston intendant (mayor) Arnoldus Vanderhorst, and S. Carolina’s two U.S. Senators – Pierce Butler and Ralph Izard. The president was greeted at the Exchange Building where he stood on the balcony facing East Bay Street and watched a “procession in his honor to whom he politely and gracefully bowed as they passed in review before him.”

Washington was then taken to his lodgings on Church Street (Heyward-Washington House) where he was attended by several of Mr. Heyward’s servants. 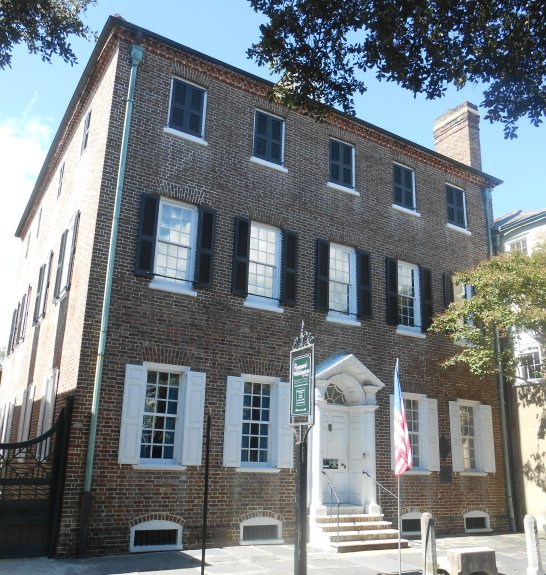 The president’s party had breakfast at Hampton Plantation, the home of the widowed Harriet Pinckney Horry. Her mother, Eliza Lucas Pinckney, had been living with her daughter for several years.

During the visit, Eliza asked Pres. Washington whether a certain oak tree should be cut down to create a better view from the portico. Washington replied that he liked the tree and the view. The tree was saved and from that day it was known as the Washington Oak.