Great Mischief is a perfectly creepy little book that unfortunately is out of print. I had to buy it used on Amazon. 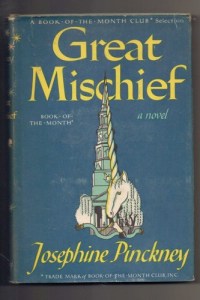 The year is 1895, and much of sleepy little Charleston is still lit by gas. Timothy Partridge operates a rundown apothecary shop, where things have’t really changed much since the glory days of Romeo and Juliet; drugs are still hanging from nails on the walls, such as bat wings, hummingbird feathers and strange, fiery potions. Timothy is supporting his shrewish sister Penelope and has a roguish best friend, the drunken doctor Golightly, who is always encouraging Tim to live a little, stop being such a fussbudget, One creepy stormy evening a young woman enters, dashing into the shop in an urgent, insistent plea for some solanum. Tim knows instantly there’s something “off” about the girl, but he has no idea that she’s actually a witch from hell, who will intertwine herself to his life and change it–forever.

Josephine Pinckney was a novelist and poet and part of the literary revival of the American South after World War I. Her first best-selling novel was the social comedy,Three O’clock Dinner (1945).She was born in Charleston on January 25, 1895 to Thomas Pinkney and Camilla Scott. She attended Ashley Hall School and established a literary magazine there, graduating in 1912. She then attended the College of Charleston, Radcliffe College, and Columbia University, and held an honorary degree from the College of Charleston, given 1935. She received the Southern Authors Award in 1946.

As a poet, novelist, and essayist, Pinckney was an active participant in the “Charleston Renaissance.” In 1920, she co-founded the Poetry Society of South Carolina. She was involved in institutions such as the Charleston Museum and Dock Street Theatre and was an early proponent of the historic preservation of Charleston. She was an active member of the Society for the Preservation of Spirituals, which transcribed and annotated African American songs.

She died October 4, 1957, and is buried in Magnolia Cemetery.