In anticipation of The X-Files mini-series coming to Fox TV in January of 2016, I decided to immerse myself into a binge watch of most of the important episodes. I was most surprised by how many of the episodes in Season 9 were really good. However, Seasons 3,4,5,and 6 were when this show was turning out a great episode week after week.

Dana Scully is smart, and hot hot hot! Monica Reyes is almost as hot hot hot. The Smoking Man is one the greatest characters ever on TV, and the Lone Gunmen were fabulous. And Mulder is Mulder.Here are my favorite episodes … in order in which they were broadcast. I gave up trying to rank them. I did make myself leave out another 15 episodes, however. 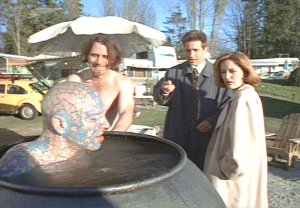 Mulder and Scully travel to Gibsonton, Florida, a town built and populated by circus and sideshow performers to investigate the death of Jerald Glazebrook, The Alligator Man. While searching for leads on the killer, the agents come across many bizarre characters including the local sheriff who was once known as Jim Jim, the Dog-Faced Boy, Dr Blockhead who performs human feats of endurance and The Conundrum, a tattooed jigsaw man who eats live animals. Scully finds it difficult to find a normal suspect, in a place where nothing is normal. 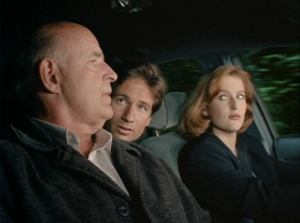 Mulder and Scully are called in to assist in an investigation of a killer who is targeting fortune tellers. The investigators have very little to go on and need all the help they can get. Clyde Bruckman, an insurance salesman, knows so many details about the crimes that Scully suspects he is the killer. Mulder however believes that Clyde Bruckman has psychic abilities and is divining the information that way. Peter Boyle as Bruckman is outstanding.

3. War of the Coprophages, Production Code: 3X12 Funny and weird.

Mulder travels to Millers Grove, Massachusetts to investigate reports of UFO sightings in the area. It turns out that the town is suffering from a cockroach invasion, and that these cockroaches have been attacking and killing people. Mulder confers with Scully by phone, she is skeptical of killer cockroaches. In each case Scully has an explanation, the exterminator was allergic to cockroaches and died of anaphylactic shock, the teenage boy was using drugs and suffered from Ekbom Syndrome, a drug induced delusion of insects invading the body causing the sufferer to try to cut them out. And the medical examiner died of an aneurysm while on the toilet. Then Mulder catches one of the cockroaches and discovers it has a metal body.

Fabulous … this may be the best episode of all! Funny and weird like a nightmare. Renowned writer Jose Chung, doing research for his book on alien abductions, interviews Dana Scully, who relates to him the case of a teenage couple, Chrissy Giorgio and Harold Lamb, who claim to have been abducted while on a date in Klass County. The only problem is, the victims and witnesses all have different versions of the events that took place. From Chrissy’s first belief that she had been a victim of date rape, to the re-appearance of Harold with his tale of alien abduction. Jesse Ventura as a Man In Black is a great cameo, and the casting of Charles Nelson Reilly is brilliant. But the scene with Mulder in the diner eating plate after plate of slices of pie is true magic.

Feels like the best lost episode of Twin Peaks.

A baby is found buried alive in shallow ground and appears to have birth defects resulting from generations of inbreeding, leading Mulder and Scully to a reclusive family who have a history of inbred children. You will also never listen to Johnny Mathis again and feel comfortable. Truly great!

This episode was so disturbing FOX only aired it on network TV twice.

A Lone Gunmen episode AND a Smoking Man episode all rolled into one!

An important episode in the X-Files mythology.

Frohike (one of the Lone Gunmen) pieces together and recites to Mulder and Scully what could be the possible life story of the Cigarette Smoking Man; from a young captain in the US Army recruited to assassinate President Kennedy, to becoming the mysterious man in the shadows at the height of a global conspiracy. What measures will the SM take to ensure that he remains a mystery forever?

Five babies in the same town are all born with tails and the local OB-GYN is blamed for tampering with fertilised eggs. However, Mulder discovers the culprit to be a simple man with a genetic deformity who may have the ability to alter his appearance.

Funny as hell and important to the mythos. In this flashback episode, Mulder meets a straight-laced federal employee, a sex mad AV expert and a nerdy computer hacker who become known as the Lone Gunmen. They bond together to help Susanne Modeski, a strange woman with evidence of a government conspiracy. When their plan to expose the conspiracy fails and Susanne is captured by a group of men-in-black, they soon become a paranoid group of government watchdogs. 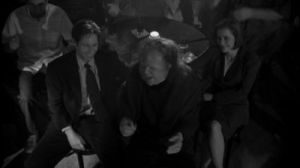 Filmed in glorious black and white with a comic book feel to it, this is a modern retelling of Frankenstein as Mulder and Scully get caught up in a town where the residents live on Jerry Springer episodes and fear a two-faced monster who has been impregnating the women.

Another episode that shows different people’s viewpoints of the same story. After Mulder chases down and kills a young man whom he believes to be a vampire, Scully realizes that his fangs are fake. The agents then return to DC, aware of the mistake they just made.

Faced with a lawsuit from the family of the man, they recount each of their sides to the story leading up to the event. Luke Wilson plays the sheriff with the hots for Scully, or maybe not, depending on who is telling the story.

Mulder goes to the Bermuda Triangle when he learns that the Queen Anne, a British luxury liner which disappeared during WWII, has re-appeared in the middle of the Sargasso Sea. Mulder’s boat is wrecked and after floating in the water, he is hauled aboard the ship which has just been hijacked by the Nazis searching for the man who will build the atom bomb. Mulder tries to convince the crew that they have traveled into the future but evidence further suggests that it is he, who is back in the past.

Mulder plants a REAL kiss on Scully in the time warp, knowing she will not remember in the real timeline. 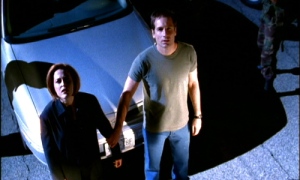 One of the best! While being detained near the famed “Dreamland” Area 51, a strange craft flies overhead and Mulder swaps bodies with an Area 51 ‘Man-in-Black’. While the other agent has fun in Mulder’s body (seducing Skinner’s secretary and putting the moves on Scully), Mulder himself finds it difficult to fit into someone else’s life, especially a shadowy one. Mulder contacts Scully about the body-swap and tries to get her the Flight Data Recorder from the UFO test flight but his alter ego uses Mulder’s FBI persona to have him arrested.

Mulder is thrown in jail at the Area 51 compound but is released when it is discovered that the flight data recorder he stole was a fake. Scully comes to her senses and realizes that the Mulder she sees isn’t who he really is and heads back to Nevada to help the real Mulder. Meanwhile, the mechanism that caused the body swap is rapidly snapping back, undoing everything in its wake and Mulder and his alter ego must race to put themselves back where they belong.

Mulder persuades Scully to join him in an investigation in Kroner, Kansas after being asked by the local Mayor, who believes that the drought they have been suffering from for the past nine months is caused by Daryl Moots. Following an argument with his fiancee Shelia, Daryl lost his leg in a car accident six months earlier, ever since then he has been able to make it rain at will.

They go to Rain King Inc’s office and meet Daryl’s secretary, she cannot understand why Mulder and Scully are investigating Daryl who is just trying to help people.. Mulder and Scully go to a local farm where Daryl is due to make it rain. When Daryl arrives he claims not to know how he does it, but after a little dancing around, there is a clap of thunder and it starts to pour with rain. That night Mulder is nearly killed by a cow picked up by the wind and dropped in to his hotel room. Next morning Shelia claims to be responsible for the weather. Mulder doubts that she is the one controlling the weather but does believe that she is the key to the case as suspicions focus in on the local weatherman and his unrequited love for Shelia.

Funny and creepy at the same time.Mulder talks Scully into investigating a haunted house on Christmas Eve where several couples have met their fate on that very night. While there they encounter endless tricks and traps set by a ghostly couple who originally made a lovers suicide pact in the house. The ghosts try to convince Mulder and Scully to kill each other.

In their first official case back on the X-Files, Mulder and Scully go undercover as a married couple at a prestigious planned community where several residents have recently disappeared after failing to comply with the rules and regulations.

Great! One of the best!

It is Saturday afternoon and Mulder is in the X-files basement office leafing through New Mexico newspaper obituaries from the 1940’s looking for anomalies, much to Scully’s dismay on such a beautiful afternoon. But Mulder stumbles across a newspaper picture of agent Arthur Dales with a Negro baseball player and the alien bounty hunter.

Ripping the page from the book, Mulder leaves the office and goes to Dales’ apartment, only to discover that Dales brother, also named Arthur has taken over the apartment. But when he shows the photo to Dales, it turns out that the photo is of him not his brother. In June 1947 Dales was a police office in Roswell, assigned to protect a Negro baseball star Josh Exley from membersof the Klu Klux Klan, bent on keeping baseball white.

Exley played for a Negro team called the Roswell Greys and had hit 60 home runs in the season matching Babe Ruth’s record, and so was being scouted for the major leagues. Only Exley does not want to play for the major leagues, he is quite content to stay where he is and play baseball for the Roswell Greys. Only Dale claims this was because Exley was actually a grey alien who had fallen in love with the game of baseball and that was the reason he did not want to play in the major leagues as reporters would dig in to his background and reveal the truth. A fear shared by Exley’s fellow aliens who send the alien bounty hunter to deal with the problem in his own unique fashion.