Upon surrendering Fort Sumter on April 15, 1861, the United States military developed a methodical campaign designed to regain control of Charleston harbor. In 1863 an attack by Union ironclad ships failed to retake Ft. Sumter, so Union General Quincy Gillmore approved a plan to reduce Charleston with artillery fire. For that purpose, he ordered the construction of a battery in the marsh between Morris and James Islands. 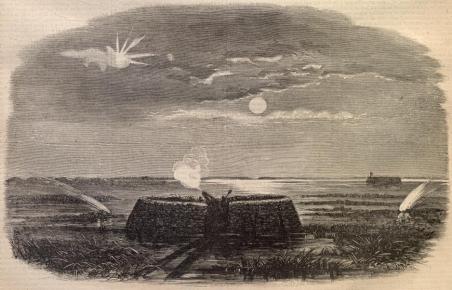 During the summer pilings were driven into the marsh to create a parapet, a grillege (crisscrossed logs) laid on top and covered with 13,000 sandbags weighing more than 800 tons. A platform was built on top of the sand bags to support a 16,500-pound gun – an 8-inch Parrot nicknamed the “Swamp Angel.” The Angel was capable of firing 200 pound incendiary shells (authorized by President Lincoln) four to five miles into the city. The shells were filled with “Greek fire,” a mixture used first in 450 BC which included sulphur, petroleum, quicklime, phosphorus, and saltpeter. It was hoped that the “greek fire” would ignite upon explosion and turn Charleston into a “raging inferno.”  The gun was mounted on August 17.

On the evening of August 21-22, 1863, Captain Nathaniel Edwards took compass readings on St Michael’s church steeple in Charleston for nighttime firing.  For the people of the North, Charleston was a legitimate military target, as well as an emotional target. Charleston was the symbol of the Southern rebellion, where secession and the first military action of the War took place. Charleston’s destruction was considered fair retribution.

“The United States government demands the immediate evacuation of Morris Island and Fort Sumter within four hours of this delivery or I shall open fire upon the city of Charleston.” The note reached Beauregard’s headquarters at 10:45 P.M. Beauregard was not at the headquarters, and since the message was unsigned, it was returned to Gillmore for verification.

At 1:30 A.M the first shot from the Swamp Angel was fired into the city, its shell landed near the present day intersection of Church and Pinckney streets. British war correspondent and illustrator Frank Vizetelly was staying at the Charleston Hotel on Meeting Street. He described the first shot “like the whirr of a phantom brigade of cavalry galloping in mid-air over the hotel and then a deafening explosion in the street. At first I thought a meteor had fallen, but a moment later … there was another whirr and another explosion. The city was being shelled. There were terrified citizens rushing about in the scantiest of costumes.”

The explosion caused panic and pandemonium among the hotel’s guests, whom Vizetelly described as “shady speculators attracted to the auctions of goods recently run through the blockade by unscrupulous characters from whom the Confederacy expects nothing.”

Over the next hour, sixteen shots landed in the city. One of the guests wrote that “We could hear the whiz of shells before they passed over our heads, and I bet the Englishman [Vizetelly] a thousand to one that the next shell would not hit us.”  The resulting flames of the bombardment could be seen by the Union soldiers and the fire alarm bells rang throughout the night.

The next morning Gillmore’s note, now signed, was re-delivered to Beauregard’s headquarters. Beauregard immediately sent back an enraged reply in which he demanded time to evacuate the city’s civilian population. Gillmore gave Beauregard twenty-four hours.

On August 23 the Swamp Angel resumed firing, shooting dozens of rounds into the city. On the thirty-sixth shot, the Swamp Angel exploded and fell silent forever, but history had been made. The firing of the Swamp Angel was the first documented firing of an artillery piece using a compass reading, and the distance covered by the shells launched into the city was farther than any previous military bombardment. Even without the Angel, the Federal bombardment of Charleston nevertheless continued until February 1865 when Union troops occupied the city. The siege lasted 587 days, the longest suffered by any American city. Charleston was under Federal occupation for the next twelve years.

After the War, the remains of the Swamp Angel were transported to Trenton, New Jersey, where they were used as part of a Civil War Monument. The gun was restored in 1994 where it remains on display in Cadwalader Park.