The Fundamental Constitution of Carolina, written by Anthony Ashley Cooper and John Locke, was adopted by the Proprietors. Even though the Fundamental Constitutions never became the official law of Carolina, a number of its provisions were implemented and accepted by the colonists. It was an extraordinary attempt to form an aristocratic government from a colony of adventurers, and also designed to attract settlers by offering religious tolerance, liberal land grants and property rights as well as “titles of honor.” 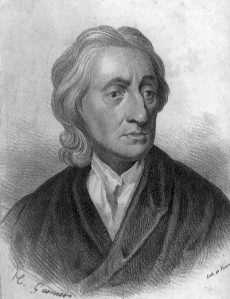 John Locke, leader of the enlightenment movement, and co-author of The Fundamental Constitutions of Carolina.

The Constitution contained similar language of Locke’s famous 1689 A Letter Concerning Toleration, and granted the Carolina Colony religious freedom and a liberty of conscience to all settlers, expressly mentioning “Jews, heathens, and dissenters.” It would have a profound influence on Charleston society, leading to the immigration of the French Huguenots and Sephardic Jews from Portugal. Some of the religious provisions were:

The Fundamental Constitution also set up a County Palatine, an official who could exercise powers normally reserved to the crown Palatine and established a system of government by the landed gentry. To vote a man must own 50 acres of property and to hold a seat in the elected legislature, he must own 500 acres. The nobility consisted of:

The Proprietors promised 150 acres of land to all “free settlers over the age of sixteen” and an additional “100 acres for every able-bodied servant” in their employee. “Master” Stephen Bull had nine servants and received 1050 acres. Servants could include family members (children, cousins, nieces …) and “indentured servants” who signed a work contract for a specific period of time in exchange for their passage to the colony. If an individual acquired 3000 acres, the estate could be declared a manor and the owner would have all the rights of a lord of the manor established by English law. 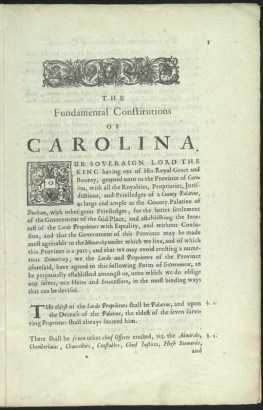 The Constitution established “that all subjects who should be transported into the province, and the children born there, should be denizens and lieges of the Kingdom of England.”

It also set out specific and strict laws for slavery, which would become one of the most important issues facing the colony during the next 200 years.  “Every freeman of Carolina shall have absolute power and authority over his negro slaves.”

The Proprietors also approved a “Grand Modell” for the planned colony, based on the grid pattern designed for the rebuilding of London after the Great Fire of 1666.

The Charleston Evening News published an editorial by Col. John Cunningham, which prompted a response from L.M. Hatch, the editor of the Standard. Cunningham charged Hatch with a “studied and wanton personal insult” and demanded satisfaction. He appointed his friend William Taber, editor of the Charleston Mercury, as his second – to negotiate the details of the duel. 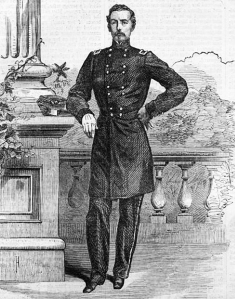 P.G.T. Beauregard  was promoted on July 21 to be one of the eventual seven full generals in the Confederate Army; his date of rank made him the fifth most senior general, behind Samuel Cooper, Albert Sidney Johnston, Robert E. Lee, and Joseph E. Johnston.

Daniel Jenkins received a charter from the state of South Carolina to operate the Orphan Aid Society. At this point Jenkins and his wife Lena were taking care of several dozen black lambs. Jenkins knew he needed help; the Society needed a substantial and dependable source of money. He hoped the city of Charleston would be a significant benefactor. After all, city authorities and elite citizens had a 100-year history of generously supporting the Charleston Orphan House.