Pierce Butler was born in County Carlow, Ireland. His father was Sir Richard Butler, member of Parliament and a baronet. Like so many younger sons of the British aristocracy who could not inherit their fathers’ estates because of primogeniture, Butler pursued a military career. He became a major in His Majesty’s 29th Regiment and during the colonial unrest was posted to Boston in 1768 to quell disturbances there. In 1771 he married Mary Middleton, daughter of a wealthy South Carolinian, and resigned his commission to take up a planter’s life in the Charleston area

Vice-President Aaron Burr met former Secretary of the Treasury Alexander Hamilton outside Weehawken, New Jersey, in a duel, at the same spot where Hamilton’s son had died in 1801. A letter Hamilton wrote the night before the duel stated:

I have resolved, if our interview [duel] is conducted in the usual manner, and it pleases God to give me the opportunity, to reserve and throw away my first fire, and I have thoughts even of reserving my second fire.

At dawn, the duel began. Hamilton’s shot broke a tree branch directly above Burr’s head. Burr’s shot hit Hamilton in the lower abdomen above the right hip. He died the next day.

Burr was charged with murder and fled to South Carolina where his daughter Theodosia lived with her family. 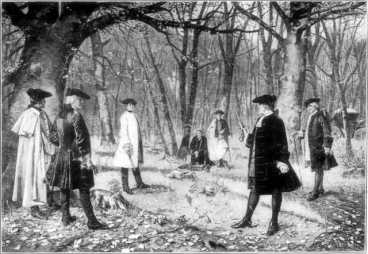