Governor Sayle wrote a letter to Ashley Cooper appealing for a clergyman.

After completing medical studies at the University of Edinburgh in Scotland, Tucker opened a practice in Charleston. He was elected to the state assembly in 1776, where he took the Patriot side. Dr. Tucker served the Southern Department of the Continental Army as a hospital surgeon and continued in that capacity until 1783. Tucker was elected to the Continental Congress in 1787 and 1788.

Although Tucker was an anti-Federalist who believed that the Constitution gave the central government too much power,he nonetheless held prominent positions in the new national government.

Henry Laurens married Eleanor Ball, daughter of a wealthy rice planter. Laurens was on his way to becoming one of the most successful men in Charlestown. A hard worker, he rose an hour before daylight and usually worked until midnight, sleeping about four hours a day. He demanded the same worth ethic in his employees.

Charles Pinckney gave a speech, refuting Alexander Hamilton’s claim that solutions to certain issues at the Convention could be found using the British system of government. Pinckney passionately disagreed:

The people of the United States are perhaps the most singular of any we are acquainted with. Among them are fewer distinctions of fortune and less of rank than among the inhabitants of any other nation. Every freeman has a right to the same protection and security … None will be excluded by birth and few by fortune.

Queen Alexandra, the sixty-nine year old widow of King Edward VII, visited the Anglo-American Expo in London with the Empress Marie of Russia and Princesses Royal and Maud. The Jenkins Orphanage Band played a special performance at the Court of Honor for the dignitaries. Queen Alexandra must have been impressed by the boys’ performance, because within a few weeks, King George V scheduled a visit to the Expo, and remarked that he was anxious to hear the “Famous Pickaninny Band.” 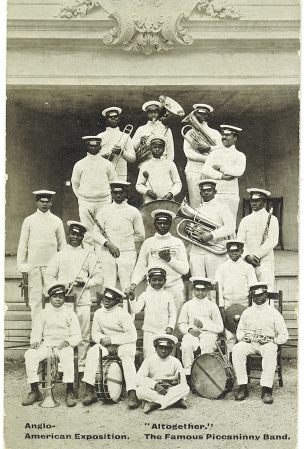