The Assembly passed an addition to the Negro Act of 1740 which decreed death for any Negro who administered poison to any person.

The trials of the conspirators began. Rolla Bennett, “the slave of his Excellency, Governor Bennett” was called before the court.  A slave named Joe LaRoche entered the room, swore on the Bible and testified that Rolla had asked him to join the rebellion three weeks ago. He testified, “I told him it could not be done and that our parents for generations back had been slaves, and we had better be contented.” Rolla testified as:

I know Denmark Vesey, on one occasion he asked me, what news? I told him; none. He replied, we are free, but the white people here won’t let us be so; and the only way is, to raise up and fight the whites. I went to his house one night, to learn where the meetings were held … Vesey told me, he was the leader in this plot … Vesey induced me to join. When I went to Vesey’s house, there was a meeting there, the room was full of people, but none of them white … He was the first to rise up and speak, and he read to us from the bible, how the children of Israel were delivered out of Egypt from bondage; he said, that the rising would take place last Sunday night, (the 16th June,) …

In the official report, Negro Plot: An Account of the Late Insurrection Among a Portion of the Black in Charleston, South Carolina it was concluded:

Rolla represented himself as the commander of the force which was to rendezvous in the vicinity of his master’s mills, & explained to the witness fully the order of attack; the division of the forces; and said, “that his troops, in their way into town, would fix his old buck (his master) and the intendant.” On being asked whether it was intended to kill the women and children, he remarked when we have done with the men we know what to do with the women.

Rolla was pronounced “unanimously guilty” and ordered to “prepare for death.”

Batteau Bennett was tried next. From the Negro Plot:

It was proved that Batteau confessed to two persons, (both of whom were introduced as witnesses,) that he belonged to the conspiracy … He stated he was to head a party near Canon’s bridge, and that he expected aid from the country. Batteau was found guilty, and sentenced to be executed on the 2d of July.

Next on trial was John Horry, the slave of former indendent, Elias Horry. John had been arrested at his master’s house at 59 Meeting Street. John, a coachman for the Horry family, testified that “As soon as the slaves took the streets, he planned to go up stairs and kill his master and family.”

Horry asked, “Tell me, are you guilty? For I cannot believe it unless I hear you say so. What were your intentions?

John replied, “To kill you, rip open your belly & throw your guts in your face.”

Stephen Smith, Peter Poyas and Ned Bennett were also found guilty and sentenced to be hanged on July 2. 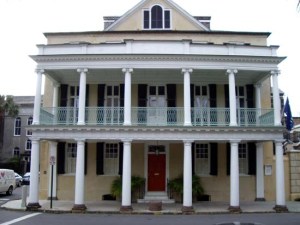