Henry Laurens returned from his internship London and opened an import and export business. Through his English contacts, Laurens entered into the slave trade with the Grant, Oswald & Company who controlled 18th century British slave castle in the Republic of Sierra Leone, West Africa known as Bunce Castle. Laurens contracted to receive slaves from the “rice coast” of Serra Leone, catalogue and market the human product by conducting public auctions in Charles Town. His company Austin and Laurens, in the 1750s, handled was responsible for the sales of more than eight thousand Africans

New royal governor, twenty-five year old Charles Genville Montagu, Duke of Cumberland, arrived. He presented a petition directing the Assembly to pay former Governor Boone’s salary for two and a half years. Montagu Street and Cumberland Street in Charleston are named after him.

While in Charlestown, Montagu lived in the home owned by Charles and Eliza Lucas Pinckney, who were living in England at the time. The Pinckney’s house was located at the present corner of East Bay and Guignard streets (now Molly Darcey’s Irish Pub). It was destroyed by the 1861 fire. 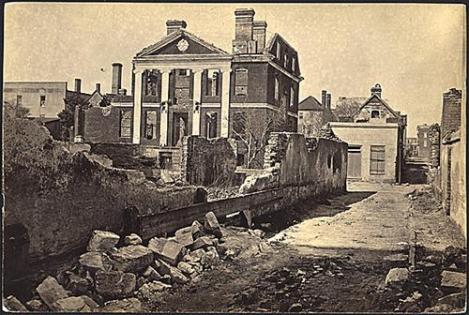 Ruins of the Pinckney mansion, looking west from East Bay up Guignard Street.

“Black Priests” appeared before the City Council asking for permission to “allow them to hold their meetings in the way they wished.” The Council denied the request, claiming that the “Missionaries” of the Philadelphia AME church were “fire-brands of discord and destruction.”

They did, however, allow daylight meetings as long as a “single white person” was present to monitor the service.