Angelina Grimke Weld gave a lecture at Pennsylvania Hall to the Anti-Slavery Convention of American Women, a gathering of mixed-race abolitionists, amid a hostile atmosphere on the streets of Philadelphia, packs of mobs parading through the streets protesting the “amalgamation” of people inside the hall.

As Angelina took the podium bricks and stones were thrown through the windows, with jeering from the outside easily carrying inside the hall, but she lectured for more than an hour, addressing the mob outside the hall:

What is a mob? What would the breaking of every window be? Any evidence that we are wrong or that slavery is a good and wholesome institution? What if that mob should now burst in upon us, break up our meeting and commit violence upon our persons – would this be anything compared with what the slaves endure?

The next day a mob stormed Pennsylvania Hall and burned it to the ground. The city’s official report concluded that the fire and riots were the fault of the abolitionists, saying they had upset the citizens by encouraging “race mixing” and inciting violence. 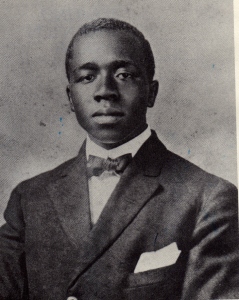 Edmund Thornton Jenkins was awarded the Charles Lucas Prize for Composition at the Royal Academy. Jenks ( as he was called) was the son of Rev. Daniel Jenkins, of the Jenkins Orphanage House in Charleston. The Jenkins Band had been performing at the Anglo-America Expo in London, but the outbreak of World War I caused the Expo to shut down. Jenks remained in London and enrolled at the Royal Academy of Music.

During his fifth year at school Will Marion Cook’s Southern Syncopated Orchestra played at London’s Philharmonic Hall. Jenks looked upon Cook as the type of musician he aspired to be – a serious black musician.