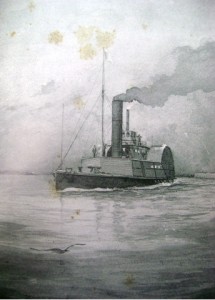 The Planter was a high-pressure, side-wheel steamer, one hundred and forty feet in length, and about fifty feet beam. She was built in Charleston, was formerly used as a cotton-boat, and was capable of carrying about 1400 bales. On the organization of the Confederate navy she was transformed into a gun-boat, and was the most valuable war vessel the Confederates had at Charleston. Her armament consisted of one 32-pound rifle gun forward, and a 24-pound howitzer aft.

On the night of May 12-13 The Planter also had on board one seven-inch rifled gun, one eight-inch Columbiad, one eight-inch howitzer, one long 32-pounder, and about two hundred rounds of ammunition, which had been consigned to Fort Ripley, and which would have been delivered at that fortification on Tuesday had not the designs of the rebel authorities been frustrated.

The Planter’s slave pilot was named Robert Smalls. On this night, three white officers decided to spend the night ashore. About 3:00 am on the 13th, Smalls and seven of the eight enslaved crewmen decided to make a run for the Union vessels that formed the blockade. 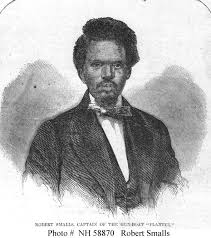 Smalls dressed in the captain’s uniform was wearing a straw hat similar to that of the white captain. He backed the Planter out of what was then known as Southern Wharf around 3 a.m. The Planter stopped at a nearby wharf to pick up Smalls’ family and the relatives of other crewmen, who had been concealed there for some time. With his crew and the women and children, Smalls made the daring escape. The Planter had as cargo four valuable artillery pieces, besides its own two guns. Perhaps most valuable was the code book that would reveal the Confederate’s secret signals, and the placement of mines and torpedoes in and around Charleston harbor. Smalls used proper signals so the Confederate soldiers would not know he was escaping in the ship.

Smalls piloted the ship past the five Confederate forts that guarded the harbor, including Fort Sumter. The renegade ship passed by Sumter approximately 4:30 a.m. He headed straight for the Federal fleet, which was part of the Union blockade of Confederate ports, making sure to hoist a white sheet as a flag.

The first ship he encountered was USS Onward, which was preparing to fire until a sailor noticed the white flag. When the Onward’s captain boarded the Planter, Smalls requested to raise the United States flag immediately. Smalls turned the Planter over to the United States Navy, along with its cargo of artillery and explosives intended for a Confederate fort.

Because of his extensive knowledge of the shipyards and Confederate defenses, Smalls provided valuable assistance to the Union Navy. He gave detailed information about the harbor’s defenses to Admiral Samuel Dupont, commander of the blockading fleet.

Smalls quickly became famous in the North. Numerous newspapers ran articles describing his daring actions. Congress passed a bill, signed by President Abraham Lincoln, that rewarded Smalls and his crewmen with the prize money for the captured Planter. Smalls’ own share was $1,500 (about $34,000 adjusted for inflation in 2012 dollars), a huge sum for the time.

The names of the black men of the crew were: 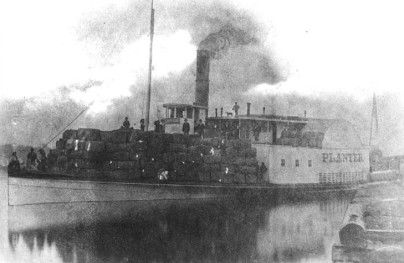 The Planter, loaded with bales of cotton at Georgetown, SC