In a letter to a friend, Eliza Lucas wrote:

Charles Town … is a polite, agreeable place. The people live very Gentile and very much in the English taste … there is two worthy Ladies in Charles town, Mrs. Pinckney and Mrs. Cleland, who are partial enough to me to be always pleased to have me with them and insist upon my making their houses my home with in town. [Note: the Pinckney house was on Union, (now State) Street.]

1780-The Seige of Charlestown.

Loyalist Maj. Patrick Ferguson and sixty American Volunteers marched to Haddrell’s Point to attack a small fort that stood on a causeway that led to Fort Moultrie. The fort, about 150 yards from the mainland, was defended by Capt. John Williams and twenty soldiers of the South Carolina 1st Regiment. The British took the fort while the cannons from Fort Moultrie fired on them until dark. The British soon fortified the fort for a possible attack.

During a midnight meeting at his house on Bull Street, Denmark Vesey, a free black carpenter, told the gathered crowd that:

we were going to have a war and fight the white people … those that did not join must be regarded as an enemy and put to death. Who made you – God – and then aren’t you just as good as your master, if God made him & you, aren’t you as free?

During the meeting Vesey set Sunday, July 14 as the date of the revolution. Why Sunday? On Sunday, thousands of people came into Charleston by river for worship services or to sell and purchase goods at the Public Market. The blacks recruited for the revolution were instructed to bring “their hoes, hatchets, axes and spades, which might be used as offensive weapons, or as instruments to break open doors.” The leaders of the Rebellion were:

Thomas Tudor Tucker, a Charleston native, died in office as the Treasurer of the United States, a position he held for 26 years. He also was President James Madison’s personal physician.

Rev.  Daniel Jenkins, who operated the Jenkins Orphanage House, received a telegram from Jules Hurtig that read “Bring with you the best musicians you have of small boys.”

Hurtig was a booking agent on Broadway. He had seen a production of Uncle Tom’s Cabin in which the Jenkins Orphanage Band played a role. Hurtig was quick to realize the band’s commerical potential. He was also responsible for supplying American acts for Anglo-American Exposition, scheduled to be held in London, and he thought the Jenkins Bands would be a major draw. 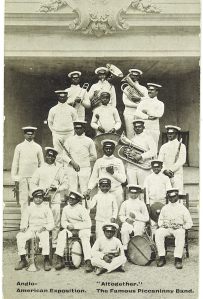 Jenkins Orphanage Band at the Anglo-American Expo in London.

Hurtig offered Rev. Jenkins a contract that paid $100 a week for a ten-week engagement, in addition to new uniforms for the band, all transportation and board for the band and caretakers. Jenkins agreed immediately. He was smart enough to bring more than just “young boys” to the Expo. The band would be performing a rigorous five hour program each day in London, on a regular stage in front of thousands of people, so Jenkins decided to bring several of his older, more accomplished and seasoned players in their late teens. He recognized that this was the most significant opportunity for the Jenkins Band to prove they were a serious musical entity.

For the entire story of the Jenkins Orphanage Band history, read Doin’ The Charleston.

3 thoughts on “Today In Charleston History: May 2”