Two dozen men from the local African Methodist Episcopal churches organized a group called “Friends of the Martyrs” and the Patriotic Association of Colored Men.” They built a white picket fence around the Union burial ground of the Washington Race Course with an arch which read, “The Martyrs of the Race Course.” The location was approximately near the present day intersection of Tenth Avenue and Mary Murray Boulevard. 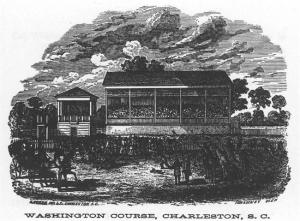 Washington Race Track – 1857. A one-mile loop around what is present day Hampton Park. Library of Congress 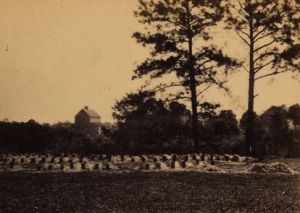 There was a run on the Freedmen’s Bank branch in Charleston. Within 2 months (after 9 years in business), the entire Bank would collapse.

“The reasons for the bank’s failure are debatable. Some scholars, such as Carl R. Osthaus, argue that the government forgot about the freedmen and made no great effort to relieve their economic plight. Other historians, including Walter L. Fleming, contend that government officials and bankers colluded for individual profit. The legacy of the Bank has been debated, too. Some write that African Americans lost their faith in the American dream and middle-class values and abandoned frugality. Others cite the establishment of black-owned banks less than fifteen years after the collapse of the Freedmen’s Bank as evidence that many African Americans remained enterprising. One thing is certain: freedmen adjusted quickly to the demands of a free-labor economy. In the words of Osthaus, they ‘made a massive investment of money.’ Over the life of the Bank, approximately 70,000 depositors had moved a little over 57 million dollars to and from their accounts.”