At 9:00 p.m., Friday evening, a fire started in shed behind Mrs. Babson’s house near the corner of King Street and Beresford Alley. It spread eastward, destroying about 560 houses and 598 other structures, or as the Daily Courier  reported: “at least one-fourth of the centre of our beautiful and flourishing city”

By 10:00 PM, it had crossed to the east side of King Street, and structures were being demolished to create firebreaks. At midnight, blazes raged down the south side of Market Street toward Meeting Street, and at 2:30 Saturday morning

“the Public Markets as far as Church Street were gone…, all the buildings on the south side of Market, the new Stores on the Burnt Lands, the splendid new hotel, …both sides of Meeting as far as Hasell Street – all, all are in ruins.” 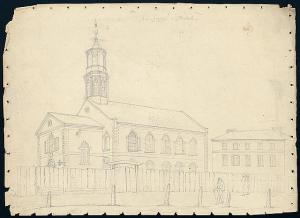 The fire roared down Hasell, Society, and Wentworth streets, all the way to the Cooper River wharves. Most of Ansonborough was consumed, including Beth Elohim Synogogue. Moses C. Levy, however, rushed into the building to save the sacred scrolls.

After the fall of Richmond, Confederate Treasurer George Trenholm took flight southward with the rest of the Cabinet, but due to his ill health, was unable to continue running.  He resigned with the approval of President Jefferson Davis but was captured by Union troops and imprisoned at Fort Pulaski, near Savannah, Georgia.

One thought on “Today In Charleston History: April 27”