John Wesley arrived from Savannah for a second visit to Charlestown. He noted in his diary:

I had the pleasure of meeting with the clergy of South Carolina among whom in the afternoon there was such a conversation for several hours on ‘Christ our Righteousness’ as I had not heard at any visitation in England or hardly any other occasion.

During Wesley’s visit he arranged with Lewis Timothy to publish the Collection of Psalms and Hymns, the first Anglican hymnbook published in the American colonies. 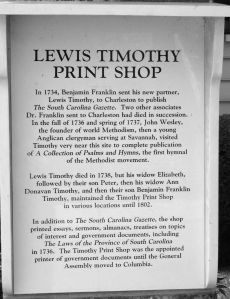 Lt. Colonel Tarleton and his British dragoons took an American cavalry encampment commanded by General Issac Huger, at Middleton’s Plantation in Goose Creek. In a surprise attack Tarleton’s troops killed fifteen and captured eighteen. Tarleton noted that “Lt. Colonel Washington was Prisoner but afterward thro’ the Darkness of the Morn escaped on foot.”

This action effectively cut off Gen. Lincoln’s escape route from Charlestown. The Continental Army was now stuck in the city.

The Federal garrison at Sumter saluted the American flag with a fifty-gun salute.  The harbor was filled with thousands of Charlestonians, on every type of boat imaginable, to watch the surrender. Major Robert Anderson takes the Stars and Stripes with him when they evacuate the fort.

The bells have been chiming all day, guns firing, ladies waving handkerchiefs, people cheering and citizens making themselves generally demonstrative. It is regarded as the greatest day in the history of South Carolina.

Maj. Gen. Robert Anderson, who surrendered Fort Sumter to the Confederates, came out of retirement to re-raise the same Stars and Stripes over Fort Sumter that he had lowered in surrender four years earlier. This flag is now on exhibit at the Fort Sumter Visitor Education Center.

Robert Smalls, the slave who had stolen his master’s boat, the Planter, and fled to freedom, returned with the Planter to Charleston harbor for the ceremonial raising of the American flag upon Ft. Sumter. 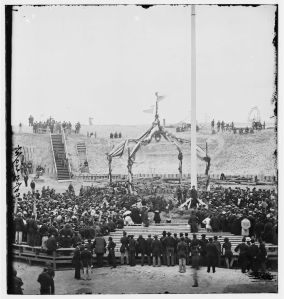