“Early in April” (the only date recorded, but upon investigation of related documents, letters etc … April 6-7 seems to accurate) the Carolina sailed into what is now Charleston harbor, navigated past something called “Oyster Point” (a spit of sandy land which at low tide was covered with shells) and sailed up the Kiawha (Ashley) River. About three miles inland they landed on the west bank. They named the settlement Albemarle Point (named after George Monck, Duke of Albermarle, one of the Lords Proprietor.) Albermarle Point is currently the site of Charles Town Landing, a state park. It became the third English colony in North America (Virginia, 1607 and Massachusetts, 1620).

They chose a nine-acre site on what is now called Town Creek, making the settlement invisible to vessels sailing into the harbor until they sailed more than three miles inland around the curve of the Ashley River. Security from the Spanish was always a major consideration.

The cargo of the Carolina included:

The passengers include: 29 “Masters” (men of property) and “free” persons; 63 indentured white servants; and 1 black slave. One of the servant girls, Affra Harleston, married the first mate of the Carolina, John Coming.

Pres. Lincoln notified Governor Francis Pickens and Gen.P.G.T. Beauregard that he had sent a naval expedition to resupply Fort Sumter, including 200 reinforcements. Pres. Jefferson Davis ordered Beauregard to prevent those provisions from being delivered.

The plot thickens, the air is red hot with rumors … In spite of all, Tom Huger came for us and we went on the Planter to take a look at Morris Island …

A reporter for the New York Times wrote about the attitude among Charleston’s city’s elite. He suggested that a doctor be sent to the city to “give us a proper analysis of them.” He reported:

The more I see of the men of Charleston, the more convinced I am that very many of them act, talk and behave like perfect children … Charleston is a sublime mystery not measured by any of the common-sense rules that govern one in their intercourse with ordinary people. 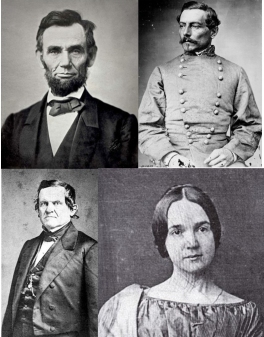