Sarah Addison Allen has written six quirky small town Southern novels that mix gentle realism with magical fantasy. First Frost is a sequel to her first book, Garden Spells, a charming novel that set her template. Allen’s books are a winning fluffy concoction which usually include: 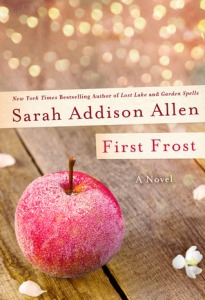 In Allen’s two most recent novels, The Peach Keeper and Lost Lake, that formula was beginning to feel a bit worn. Neither of those books had the freshness and the storylines felt forces. With First Frost, Allen returns to form a bit, mainly because it is a revisit to the fertile ground where the template was established – the Waverly sisters.

Claire Waverley has started a successful new venture, Waverley’s Candies.  Though her handcrafted confections are singularly effective, the business of selling them is costing her the everyday joys of her family, and her belief in her own precious gifts. Her sister Sydney is losing her balance also. With each passing day she longs more for a new baby Yet the longer she tries, the more her desire becomes an unquenchable thirst, stealing the pleasure out of the life she already has.

Sydney’s teenaged daughter, Bay, has lost her heart to the boy she knows it belongs to…if only he could see it, too. But how can he, when he is so far outside her grasp that he appears to her as little more than a puff of smoke?

When a mysterious stranger shows up and challenges the very heart of their family, each of them must make choices they have never confronted before.  And through it all, the Waverley sisters must search for a way to hold their family together through their troublesome season of change.

Although Allen’s fiction is often called “fluffy”, “enchanting” and “charming,” creating such lightweight concoctions is harder than it looks, an art within itself. And as charming as her books are, I keep hoping that Allen at some point moves away from this template. I’m sure her publisher is clamoring for more and more of the same because publishers have become infected with a Hollywood mentality – they only want what has sold before.

Allen, however, has a real gift of developing characters and situations. She can become an American version of Maeve Binchy … yes, she has that sort of talent. Here’s hoping that Allen at some point will move past her current template and into meatier (pun intended) and more involved stories. I, for one, will be anxious to read them.