John C. Fremont was born in Savannah, Georgia, the illegitimate son of Mrs. Ann Pryor and her French tutor, Charles Fremon. As a young man, John Fremont attended the College of Charleston and in 1838 he was appointed second lieutenant in the Corps of Topographical Engineers of the U.S. Army. He assisted and led multiple surveying expeditions through the western territory of the United States and beyond. Due to his extensive explorations Fremont was nicknamed “The Great Pathfinder.” 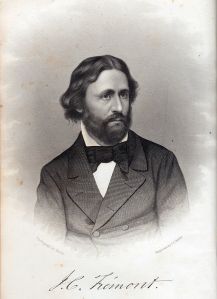 In 1842 Fremont met frontiersman Kit Carson for the first time on a Missouri steamboat in St.  Louis. The two men then led a five-month journey into present-day Wyoming. During a second expedition Fremont and Carson mapped the second half of the Oregon Trail, from South Pass to the Oregon Country, following a route north of the Great Salt Lake, down the Snake River to the Columbia River and into Oregon.

They came within sight of the Cascade Range peaks and mapped Mount St. Helens and Mount Hood. Rather than continue west through the Columbia River gorge to Fort Vancouver, the party turned south and followed Fall Creek to its headwaters near the present-day northern border of California. They ventured into the Sierra Nevada, becoming some of the first Americans to see Lake Tahoe.

Upon his return, Frémont produced a new map, using data gathered during the first expedition to update an earlier map by Gibbs.  Congress published Frémont’s “Report and Map”; it guided thousands of overland immigrants to Oregon and California from 1845 to 1849 which helped guide the forty-niners through the California Gold Rush.

Fremont later served as a General in the U.S. Army during the Civil War, one of the few Southerners who did not join the Confederacy. He created a controversy when given command of the Department of the West by President Abraham Lincoln. Always an independent-minded man, Frémont made decisions without consulting Washington D.C. or President Lincoln. In 1861 Frémont issued an emancipation edict that freed slaves in his district, and was relieved of his command by President Lincoln for insubordination. Lincoln claimed that Fremont “should never have dragged the Negro into the war.” Two years later, Lincoln would issue his own Emancipation Proclamation and be forever celebrated. Ironically, the first Federal official to free slaves during the War was a Southerner who was reprimanded for his actions.

In 1856 Fremont was the first Republican to be nominated as a Presidential candidate.