Most scholars agree that the sometime today, the Patriot  wrecked off Cape Hatteras. Lost with the ship was South Carolina first lady, Theodosia Burr Alston. 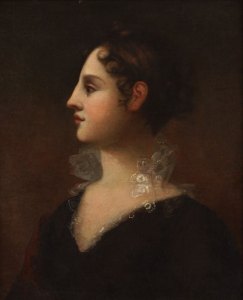 On December 31, 1812, Theodosia sailed aboard the schooner Patriot from Georgetown, South Carolina to visit her father, former vice president Aaron Burr in New York. The Patriot was a famously fast sailer, which had originally been built as a pilot boat, and served as a privateer during the War of 1812, when it was commissioned by the United States government to prey on English shipping. The schooner’s captain, William Overstocks, desired to make a rapid run to New York with his cargo; it is likely that the ship was laden with the proceeds from her privateering raids.

Logbooks from the British warships report a severe storm of the Carolina coast on January 2, 1813. The Patriot would have been just north of Hatteras when the storm was at its fiercest, facing hurricane-force winds on the early morning hours of Sunday. The Patriot was never heard from again. Despite many romantic conspiracy stories that Theodosia survived the wreck, or was captured by pirate, she most likely was lost at sea with the rest of the passengers and crew.