Upon the news of Thomas Whitmarsh’s death in Charleston, Lewis Timothy arranged with Benjamin Franklin to take over the publishing of the South Carolina Gazette weekly newspaper on a six-year franchise contract.

Williamson Willis was hanged for “stealing a Negro.”

Sarah Grimke was born in Charleston, daughter of Judge John Grimke, planter, slaveholder, lawyer and politician. She later moved to Philadelphia. She and her younger sister, Angelina, became prominent abolitionists.

St. Michael’s held its first service following the conclusion of the War. 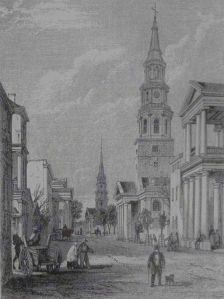