First Masonic Lodge in Charlestown was organized under a warrant issued by Lord Weymouth of England, Grand Master of the Ancient and Honorable Society of Free and Accepted Masons. An announcement in the Gazette said:

Last night a Lodge of the Ancient and Honorable Society of Free and Accepted Masons, was held, for the first time, at Mr. Charles Shepheard’s, in Broad Street, when John Hammerton, Esq., Secretary and Receiver General for this Province was unanimously chosen Master, who was pleased to appoint Mr. Thomas Denne, Senior Warden, Mr. Tho. Harbin, Junior Warden, and Mr. James Gordon, Secretary. 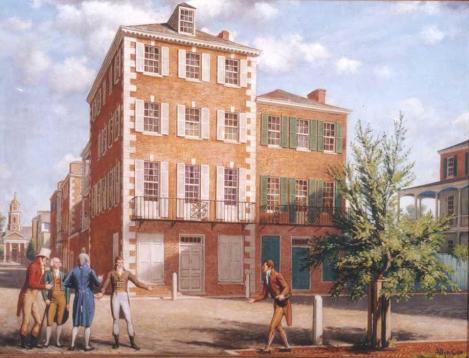 Shepheard’s Tavern (corner of Broad & Church Streets), circa 1740s; In the distance on the left hand corner can be seen St. Philip’s Church

Gov. Glen proposed a plan for repairing and improving the city’s fortifications. He claimed the defenses were “piece-meal” and suggested the hiring of a “regular Engineer.” Without consulting the Assembly, Glen hired German-born engineer William De Brahm.

Due to political pressure and threats of violence, George Saxby and Caleb Lloyd, stamp officer and stamp distributor, publically promised not to perform their duties.

Lt. Gov. Bull called the Gazette the “Conduit Pipe of northern propaganda … poisoning the minds … against the Stamp Act.” In an effort not “to directly support and engage in the most violent Opposition” Peter Timothy temporarily suspended the publication of the South Carolina Gazette.

Charleston City Council passed an ordinance that established the Charleston Orphan House. Until a structure could be built Mrs. Elizabeth Pinckney provided a building on Market Street, close to the Sailors’ Homes, for children too young to be bound out.