Moore originally arrived in Carolina in 1675 from Barbados, married one of Sir John Yeaman’s daughters and became a member of the Goose Creek faction, opposed to the Fundamental Constitutions. The Dissenters contested Moore’s “unjust election,”but the Lords Proprietors saw to it that Moore remained governor, and they made it clear that the Dissenters were no longer in favor. 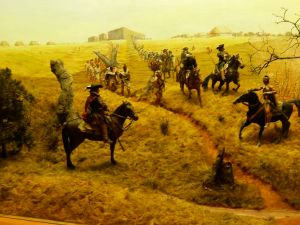 Moore became the leading Indian trader in the colony. His father was Roger Moore (Rory O’More), one of the leaders of the 1641 Irish Rebellion against the anti-Catholic Puritan forces and evidently inherited his father’s rebellious nature.

On news of the outbreak of Queen Anne’s War in 1702, he led 500 colonists, 300 native allies, and 14 small ships on an invasion of Spanish Florida along the coast devastating the lands around St. Augustine. While the town of St. Augustine was razed, its central fortress, Castillo de San Marcos, where the Spanish and numerous allied Indians had taken refuge, resisted Moore’s siege. The 1702 campaign was viewed as a disaster due to the failure to take the fortress and the expenses incurred, and Moore resigned his post.

James Petigru’s first born child, eight-year-old Albert, while playing inside the house, fell over the bannister thirty feet down the stairwell and was killed. His death devastated the family. Petigru’s wife, Amelia, deteriorated, suffering from severe headaches and became addicted to opiates.