Silas Deane, representing Connecticut in Congress wrote, “Mr. Gadsden leaves all N. England Sons of Liberty for behind, for he is for taking up his Firelock & marching direct to Boston.”

A young slave named Molly was executed for arson, after being convicted of “robbing her master, and setting fire to capt. Vesey’s house at the Grove.” In her confession, Molly apparently not only admitted to “being guilty of these crimes, and also that she was the person who set fire to her master’s house at Belvedere.”

Molly added to the terror by declaring that “she was persuaded to the commission of these atrocious acts by a Frenchman, named Renaud, her master’s gardener, formerly a servant to Mr. Michaud…belonging to the French Republic.”

Gen. Foster ordered 600 Confederate prisoners to be placed on Morris Island “as an act of retaliation” for failing to remove the Federal prisoners from Charleston. Gus Smythe, from his look out perch in St. Michael’s steeple, could see, through his telescope the prisoners “in the morning getting their rations & also see the poor fellows looking thro’ the cracks of the fence.” 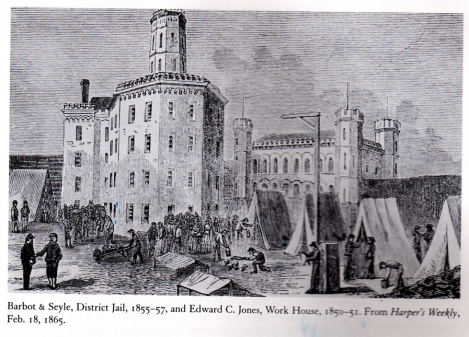 View of the yard behind the City Jail. To the right is visible the Work House and City Hospital.

By that time Gen. Jones was in charge of 6000 Federal prisoners within the city limits. Most of them were housed in the City Jail at the corner of Franklin and Magazine Streets. Others were housed around the corner in Roper Hospital at the corner of Queen and Logan Streets. The majority were held at the Charleston racecourse. Most of the Federal prisoners considered their imprisonment in Charleston to be a life-saving change, away from the hellish conditions of Andersonville. Lt. Benjamin Calef wrote:

We reached Charleston on the morning of August 13, and were kept waiting a long time in the Street, when I procured some fresh figs, bread and milk, and seated on the curb-stone, made an excellent breakfast … I should not omit to speak of the long piazza at the front [of Roper Hospital], on which I have spent so many hours with my pipe for my companion.

The Confederate prisoners on Morris Island slept beneath a canvas roof to shield them from the rain, and no shade trees. Their daily rations consisted of “three army crackers … and a half pint of soup.”