William Rhett was born in London, during the Great Fire.  Thirty-two years later he would move to Carolina and become one it’s most prominent citizens.

Thomas Lynch, Christopher Gadsden and John Rutledge sailed for New York on the Carolina Packet to attend the Stamp Act Congress. At age twenty-six, Rutledge was the youngest delegate in attendance. 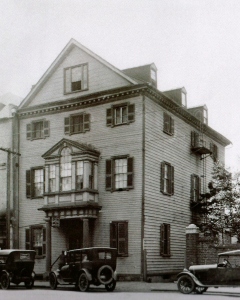 The building that once housed Jehu Jones’s hotel on Broad Street.

Jehu Jones, Jr., a mulatto, was born in Charleston as a slave. He would later become a successful tailor and gain his freedom in 1798. He operated a successful hotel on Broad Street (next to St. Michael’s church) for many years.

In one of the stranger events, a shower of warm stones fell from the sky on the offices of the News and Courier – twice! The shower of stones occurred at 7:30 a.m. and the second shower at 1:30 p.m. Coming four days after the devasting earthquake, this event increased the unease of a shocked population.