Songs for Swingin’ Lovers! was the tenth studio album recorded by Frank Sinatra, his fourth for Capitol Records, arranged by Nelson Riddle and released in March 1956. It helped to complete Sinatra’s “comeback.”

During the 1940s Sinatra had been one of the biggest stars in America – as a crooner for the bobbysoxers with Tommy Dorsey and as a solo artist. He had also transitioned easily into a successful movie career in a couple of musicals with Gene Kelly. However, by 1951, his career was waning. In February he was walking through Times Square and the Paramount Theater marquee glowed in announcement of Eddie Fisher in concert. Swarms of teen-age girls had gathered in frenzy, swooning over the current singing idol. For Sinatra this display of enthusiasm for Fisher validated a long-time fear – he was washed up. In a moment of sheer despair he attempted suicide by sticking his head in the oven and turning on the gas. A friend found him in the apartment, lying on the floor sobbing. He claimed he was such a failure that he could not even commit suicide.

In September, Sinatra made his Las Vegas debut at the Desert Inn which led to a career boost. Two years later, 1953, he appeared in the eve-of-Pearl Harbor drama From Here to Eternity (1953), for which he won an Academy Award for Best Supporting Actor. This role and performance marked a turnaround in Sinatra’s career. He signed with Capital Records and was paired with orchestra director / arranger Nelson Riddle. 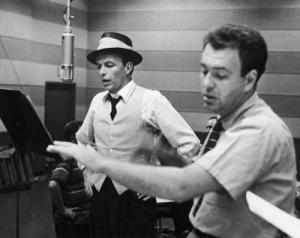 After the ballad-heavy and moody In the Wee Small Hours, Frank Sinatra and Nelson Riddle returned with an LP of up-tempo, swinging material called Songs for Swingin’ Lovers! The LP was filled with reinterpreted pop standards (by Riddle), whose inspired arrangements turned these older songs into something new, hip and joyful.

Riddle’s arrangements obviously inspired and invigorated Sinatra. He sings with supreme confidence, authority, wit and joy, turning in creative and iconic renderings of well-known lyrics. The LP’s centerpiece is a breathtaking, re-defining version of “I’ve Got You Under My Skin,” – a bone fide musical classic. No other version of this song ever sounds right after you’ve heard Sinatra and Riddle’s version.

In 2000 the album was inducted into the Grammy Hall of Fame, and ranked #306 on Rolling Stone magazine’s list of the 500 greatest albums of all time.  Almost fifty years later it is still 45 minutes of sheer musical bliss.