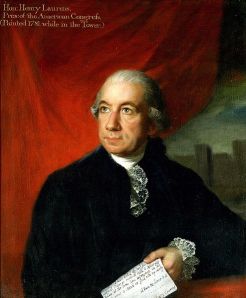 Henry Laurens wrote his daughter, Martha, from Philadelphia, as he was preparing to leave for England.

My dearest Patsy, remember my precepts; be dutiful, kind and good to your Aunt … let all your reading, your study, and your practice tend to make you a wise and virtuous woman, rather than a fine lady; the former character always comprehends the latter, but the modern fine lady … is too often found to be deficient both in wisdom and in virtue.

Thomas Jeremy, a free black man, was hanged at the workhouse green on Magazine Street, next to the Jail. Known as “Jerry the pilot” he was convicted of conspiring to foment a slave insurrection. His body was taken down and burned.

Jeremy, worth £1000 sterling and a slave owner himself, had supposedly claimed that if British warships came, he would pilot them across the Charlestown bar himself. Lord William Campbell, Carolina Royal Governor, became convinced that Jeremy was innocent. He believed that the swirling emotions of rebellion, fueled by the massacre at Lexington and Concord, created an atmosphere in which Jeremy was an unwitting victim. The day after Jeremy’s execution Campbell wrote, “I could not save him My Lord!”