Home » Black History » Why Are There No Members of the Jenkins Orphanage Band in the South Carolina Entertainment and Music Hall of Fame?

Why are there no members of the world famous Jenkins Orphanage Band in the South Carolina Entertainment and Music Hall of Fame, or the Lowcountry Music Hall Of Fame?   The Hall has such luminaries as Andie McDowell (we still watch “Groundhog Day” despite her being in it), Leeza Gibbons (celebrity-news reader) and Vanna White (the only professional letter-turner in the Hall of Fame.)  The Hall also counts as members Rob Crosby, Bill Trader and Buddy Brock. (Yeah, I know, you’ll probably have to Google them to find out who they are too.)

I am not saying that any of these people don’t deserve to be in the Hall – they probably do. But not to the exclusion of more deserving artists. I would like to nominate several artists currently not in the Hall who influenced and enriched American culture in more deserving ways than interviewing celebrities on “Entertainment Tonight” or being eye candy for a game show.

From the 1890s to the 1940s the Jenkins Orphanage Band traveled across the United States and across Europe performing on street corners, on Broadway and for royalty. Members of the Jenkins Band were instrumental in transforming the music performed during 19th century minstrel shows into blues, ragtime and ultimately, jazz.  My nominees are: 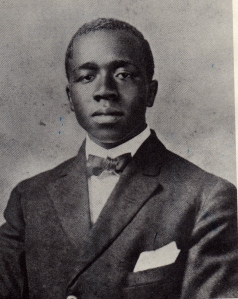 His father, Rev. Daniel Jenkins operated the Orphan Aid Society (a.k.a. the Jenkins Orphanage) which operated a boy’s brass band as a fundraising tool, as a kind of minstrel show on the sidewalks of towns up and down the East Coast. Called “Jenks” by everyone, he received private piano lessons from a white man in Charleston, Mr. Dorsey, and quickly mastered the piano, clarinet and violin. His father insisted that he work as a music instructor for the Jenkins Band, and also travel with them. Jenks resented having to lead a group of ragamuffin orphans who mugged, strutted and played-the-fool during their street performances. He felt it was beneath him. He wanted to play serious music. The kids, of course, made fun of the prim and dandified Jenks.

In 1910 Jenks enrolled in Morehouse College in Atlanta, Georgia to study music.  Two years later he was forced by his father to leave college in order to accompany the Jenkins Band to London, where it was a featured act at the Anglo-American Expo. When the Expo came to an abrupt close, due to the outbreak of World War I, Jenks convinced his father to pay his tuition to the Royal Academy of London. For seven years Jenks excelled in his studies, winning awards for composition, and becoming a master in several instruments. During his time at the Academy he composed “Charlestonia: A Rhapsody.”

After graduation he moved to Paris where he became one of the most sought after musicians in the most popular Parisian nightclubs. Paris was “jazz mad” in the 1920s and for several years Jenks embraced the glamorous, hedonistic life of Paris. However, in 1925 he began to compose an opera, “Afram” and expanded and orchestrated “Charlestonia: A Rhapsody” which he conducted successfully in Belgium with a full orchestra.  In July 1926, he was admitted to a Parisian hospital for appendicitis. He contracted pneumonia and died on September 12, 1926, cutting short the career of a promising young black composer. He is buried at the Humane Friendly Cemetery in Charleston, SC.

Benford became the Jenkins Orphanage Band’s ace drummer. In 1920 he was playing in New York City and gave drumming lessons to a young wunderkind named Chick Webb. In 1928, he was the drummer for some of the most influential jazz music ever recorded as part of Jelly Roll Morton’s Victor Records sessions.

During the Depression Benford moved to Europe and for the next 30 years recorded hundreds of songs with more than a dozen bands. His most famous recording session was with Coleman Hawkins, Django Reinhardt, Stephane Grapelli and Bennie Carter, released as Coleman Hawkin’s All-Stars.

He continued to play music until his death in 1994, a career that spanned seventy years.

Raised in the Jenkins Orphanage, Jabbo quickly became one of the best Jenkins Band musicians during the years of 1915-1924. Brash and flamboyant, he was a natural performer.  At age 17 he was playing in New York City at Smalls Paradise, the second most popular club in Harlem (most popular was the Cotton Club.) He became the hottest trumpet player in the city, which is like being the hottest guitar player in the hottest rock and roll band (think Eric Clapton, Jimmy Page and Eddie Van Halen.)

In 1927 he recorded one track with the Duke Ellington orchestra (“Black and Tan Fantasy”) filling in for the ailing Bubber Miley. Duke offered him a permanent job with the Ellington Orchestra, which Jabbo turned down because Duke only offered $90 a week, and Smith was making $150 with the Paradise Orchestra.

In 1928-29 Jabbo played with James P. Johnson (composer of the song “Charleston”) and Fats Waller in the Broadway show Keep Shufflin. When the show closed in Chicago Jabbo recorded nineteen historic songs for the Brunswick Record Company that are still considered some of the most influential jazz recordings. They are considered to be the first cool jazz improvisations and be-bop style playing.

By the 1950s Jabbo Smith was out of music, living in Wisconsin. As a swan song, in the 1980s he returned to Broadway in the show One Mo’Time and became the darling of New York for several months. Jabbo is a key link in the development of modern jazz trumpet playing: Louis Armstrong →Jabbo Smith →Roy Eldridge →Dizzy Gillespie→Miles Davis→Wynton Marsalis.

As a child Freddie used to sing and dance on the streets of Charleston and became friends with members of the Jenkins Orphanage Band. Though never an orphan, he played with the Band and remained in New York City during their tour in 1932. Five years later he was discovered playing at the Black Cat Club in Harlem and asked to join the Basie Orchestra, forming what became known as the All-American Rhythm section: Basie-piano, Green-guitar, Walter Page – bass, and Jo Jones-drums.

For the next 50 years Freddie Green became the “left hand” of the Basie Orchestra, the spiritual force that held the music together. Across the world he became known a “Mr. Rhythm,” the greatest rhythm guitar player in jazz history. It is almost impossible to find a photo of the Basie Orchestra that does not include Green.

He became a composer and arranger for the orchestra and the arbitrator of good music. Byron Stripling, trumpet player for Basie said, “If an arranger comes in and his work is jive, Freddie just shakes his head and it’s all over.”

Green died in Las Vegas after a Basie Orchestra performance ending one of the quietest most legendary musical careers of the 20th century. Irving Ashby described Freddie Green’s influence on music as:  “Rhythm guitar is like vanilla extract in cake, you can’t taste it when it’s there, but you know when it’s left out.”

During the late 1930s, Anderson became the latest in a line of hot trumpet players in the Jenkins Band. He developed a technique of playing in high registers, two octaves above the rest of the band. It was Anderson’s way of showing off, and getting the girls in the audience to notice him. Wynton Marsalis called Anderson “one of the best” scream trumpet players ever.

After leaving the Jenkins Band in 1937, Anderson played for several bands, and performed at the Apollo Theater in Harlem. During World War Two, Anderson played in a Special Services Army Band, performing for troops on bases across the world.

In 1945, he joined Lionel Hampton’s Band and then was hired by Duke Ellington, and became a featured player for the Duke during the next 20 years. Ellington re-arranged many of his classic songs to take advantage of Anderson’s talent for “scream” trumpet playing. Anderson is heavily featured in one of the most popular jazz recordings ever, the 1956 Newport Jazz Festival.

If you agree these men should be in the South Carolina Entertainment Music Hall of Fame, please forward/share/like /comment this article. You can read the entire story of the Jenkins Orphanage in my book, DOIN’ THE CHARLESTON.

One thought on “Why Are There No Members of the Jenkins Orphanage Band in the South Carolina Entertainment and Music Hall of Fame?”